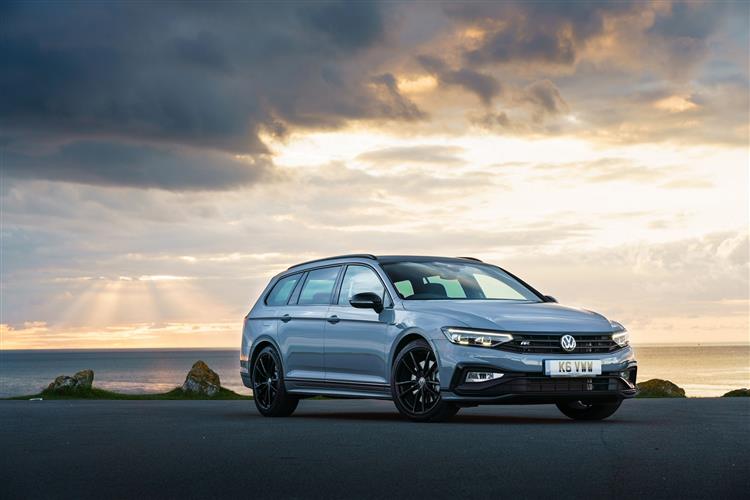 Utility is a surprisingly hard sell. Yes, we tend to aspire to the sort of utility we don't actually need, which is why we hanker after sports watches that can submerge to the bottom of the Mariana Trench, Arctic-spec down jackets to withstand a snow flurry in Surrey and, yes, sports utility vehicles that could cross the Darien Gap when all we really need them for is to bump over a parking kerb outside Starbucks. Genuine utility isn't quite so aspirational. Seats that you can clean a baby's worst efforts from, room in the back for a bookcase from IKEA, metronomic reliability; it's what people need but not what draws people into showrooms looking for a dotted line to sign. That's the size of the challenge facing Volkswagen's current generation Passat Estate, a car that does utility utterly brilliantly. Especially in this updated form.

Volkswagen is very good at creating a premium driving experience. It always has been with the Passat Estate, so it is perhaps appropriate that the revised version of this eighth generation model was the first car in the company's range to showcase a whole new generation of media and active driving assist technology. The car's latest 'Travel Assist' system now allows 'level 2' partially-autonomous driving at speeds of up to 130mph and the Adaptive Cruise Control system's now predictive, meaning to can anticipate and adapt to road conditions before you reach them. All of which clues you up for what you're in for here. A driving experience that in every way is prioritised towards laid back comfort. Exactly as a typical Passat user would want. Refinement and ride quality are difficult to better in this class - even if you stretch to a contender with a posh premium badge. The flip side of that is that no version of this car is able to offer up a really memorable handling package. Mind you, typical Passat owners would probably be mystified by why such a thing would ever be needed. For them, a model of this kind is there for the journey, not for the way it should be driven. Under the bonnet, the key news for Passat buyers is the introduction of an extensively re-worked version of this model's volume 150PS diesel engine, now badged the 2.0 TDI EVO 150PS. You can have it with 122PS too. As before, it can be had with a 7-speed DSG auto 'box and now features Active Cylinder Shutdown for greater efficiency, the first time that this feature has been fitted to a Volkswagen diesel engine. For petrol people, there's the VW Group's familiar 150PS 1.5-litre TSI EVO unit, available with either manual or DSG auto transmission. Up to a quarter of Passat Estate sales are expected to be taken by the Plug-in hybrid petrol/electric GTE version, which mates a 1.4 TSI petrol engine with an electric motor. This derivative now uses an upgraded lithium-ion battery which now enables a longer 36-mile WLTP-rated driving range. Across the line-up, there's a new 'Travel Assist' feature which allows the car to be driven at highway speeds in partly automated mode.

This eighth generation Passat Estate was shorter and lower than its predecessor but it was given a longer wheelbase, so there's slightly more room in size. The difficulty in attracting buyers away from the likes of BMW and Audi is that you need your product to offer all the attractions of a BMW and Audi but at a more competitive price. That includes looking as expensive as these brands, which is something the Passat Estate has often struggled to achieve. Not any more. At least not from the outside, where this facelifted model looks sleek, chiselled and polished with full-LED head and tail lights that emphasise the car's width. Inside, cabin quality is at least the equal of what you'd find in more expensive premium brand mid-sized saloon, especially if you're able to stretch to one of the higher trim levels. The interior features a big central 8-inch screen and a set of optional digital 'virtual' dials. The seats, as in most Volkswagens, initially feel unyielding but are supremely comfortable over longer distances. Three adults can fit in the back too - there's far more space than you'd get in a 3 Series, a C-Class or an A4. The boot measures an enormous 650-litres under the tonneau. Fold the seats down and that extends to a huge 1,780-litres. Big storage bins in the doors and centre console add everyday utility to the cabin.

The estate models add just over £1,500 to the prices of the saloons and there are three trim levels to choose from - 'SE', 'SEL' and 'R-Line'. DSG auto transmission is now standard across most of the range. Prices start at just under £26,000 for the entry-level 1.5-litre TSI petrol model in 'SE' trim. The 2.0 TDI 150PS diesel unit many want starts from just under £31,000. You'll need to spend at least around £38,000 for the GTE Plug-in hybrid. All variants are well equipped, even entry 'SE' derivatives featuring full-LED headlights. 'SEL' examples can be identified by their 17-inch 'Nivelle' alloy wheels, and also offer Vienna leather seats, the Discover Navigation system with an 8-inch colour screen and Voice Control. SEL cars also have tinted rear windows and silver roof rails for the Estate. 'R-Line' trim brings 18-inch 'Monterrey' alloy wheels, sports suspension, an R-Line exterior styling pack and Nappa leather front sport seats embroidered with the R-Line logo. There are also stainless steel pedals, 3Zone climate control and black roof lining, while keyless entry and an easy open boot also feature as standard on this top trim level. The Plug-in hybrid GTE version and the SUV-style 'Alltrack' estate variant get their own specific trim specs.

The Passat Estate is a car that sells on pragmatism, so it's a critical component of its success that the running costs of the vehicle flag up all the right numbers. Remember that despite its increasingly urbane appeal, the bulk of this car's sales will still come from fleet buyers who don't give a brass tuppence about soft-touch dashboards, USB slots or how many watts the stereo has. For them it's about bills, bills, bills; residual values, fuel economy, carbon dioxide emissions, insurance costs, servicing overhead and so on. The Passat looks like it's getting off on the right foot. Go for the 1.5-litre TSI petrol model and your combined cycle fuel economy is rated at 44.8mpg (WLTP), while your CO2 return would be rated at 143g/km of CO2: or up to 57.6mpg and 127g/km for the 2.0 TDI diesel; these figures pretty good for a large estate. The cleanest option is the GTE Plug-in petrol hybrid version, which can now go up to 36 miles (WLTP) between charges. Aggressive pricing sees the Passat square up more or less head on with tackle like the Vauxhall Insignia and engine for engine, the Passat is a good deal more economical and cleaner to boot. Pull residual values into the equation and the Passat wins hands down.

Sooner or later, as a potential customer here, you'll come to ask yourself the inevitable question about the Volkswagen Passat Estate, "Am I about to buy a boring car?" You might well ponder whether that makes you a boring person, but that association is a fallacy. If you are fundamentally boring, a Ferrari isn't going to magically endow you a Clooney-esque louche charm. Likewise, a Passat Estate, for all its undeniable utility, doesn't make you a boring person; merely one that understands what makes a great estate car. And it is a really outstanding vehicle for family buyers. Let's face it, who needs a lumbering SUV when estate cars are this good and this useful? To put the Passat Estate into that sort of perspective, consider this. To get the same interior quality and load space with all five seats in place, you'd need an SUV like a Mercedes GLE which, incidentally, starts at over fifty big ones. So don't ask yourself if you're being boring choosing a Passat Estate. Ask instead whether all those who buy big SUVs are being hoodwinked by slick marketing. If you've got this far, you probably know the answer to that one already.